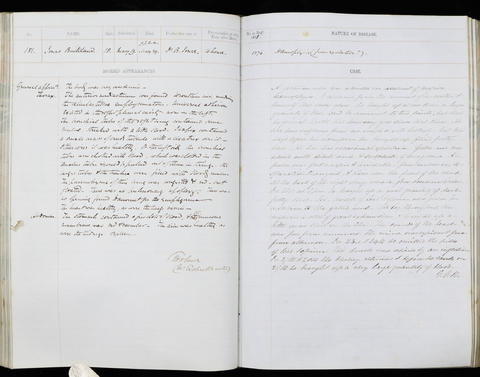 Occupation or role: Footman
Age: 18
Gender: Male
Date of admission: 19 May 1858
Date of death: 29 May 1858
Disease (transcribed): Haemoptysis (from exudation?)
Disease (standardised): Haemoptysis (Lungs); Exudation
Admitted under the care of: Bence Jones, Henry
Medical examination performed by: Holmes, Timothy and Mr Roberts
Post mortem examination performed by: Rogers, George Goddard
Medical notes: 'A footman who was admitted on account of profuse haemoptysis. It appeared from the account of his mother & himself that seven years [ago] he brought up at one time a large quantity of blood, said to amount to two pints, but that his general health had been very good since that time’
Body parts examined in the post mortem: Thorax, abdomen