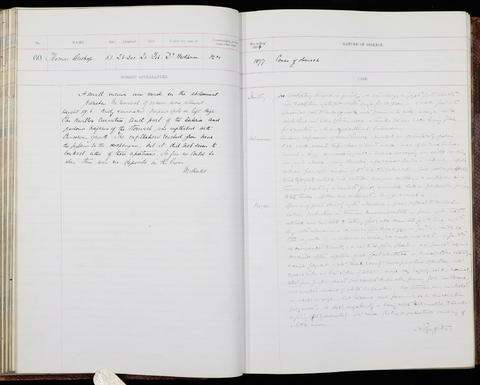 Occupation or role: Labourer
Age: 51
Gender: Male
Date of admission: 26 Dec 1884
Date of death: 25 Feb 1885
Disease (transcribed): Cancer of stomach
Disease (standardised): Cancer (Stomach)
Admitted under the care of: Wadham, William
Medical examination performed by: Griffiths, Herbert Tyrrell
Post mortem examination performed by: Sheild, Arthur Marmaduke
Medical notes: Six weeks prior to admission he had to stop short a walk due to pains on the right side and cough which continued to get worse. He had been losing flesh for four months.
Body parts examined in the post mortem: A small incision was made in the abdominal parietes. No removal of viscera was allowed.
Type of incident: n/a