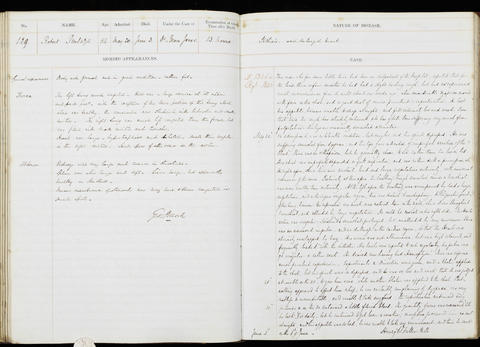 Occupation or role: [No occupation stated]
Age: 54
Gender: Male
Date of admission: 20 May 1846
Date of death: 3 Jun 1846
Disease (transcribed): Phthisis and enlarged heart
Disease (standardised): Tuberculosis (Lung); Disease (Heart)
Admitted under the care of: Bence Jones, Henry
Medical examination performed by: Fuller, Henry William
Post mortem examination performed by: Pollock, George
Medical notes: This man who for some little time had been an outpatient of the Hospital, reported that for the last three of four months he had had a slight hacking cough and six weeks before admission he experienced considerable dyspnoea with pain in the chest.
Body parts examined in the post mortem: Thorax and abdomen
Type of incident: n/a