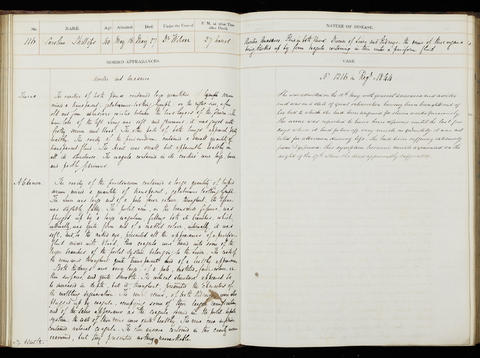 Occupation or role: [No occupation stated]
Age: 40
Gender: Female
Date of admission: 15 May 1844
Date of death: 17 May 1844
Disease (transcribed): Ascites. Anasarca. Fluid in both pleura. Disease of Liver and Kidneys – the veins of these organs being blocked up by firm coagula containing in their centre a puriform fluid.
Disease (standardised): Ascites (Abdomen); Fluid (Pleura); Disease (Liver); Disease (Kidney)
Admitted under the care of: Wilson, James Arthur
Medical examination performed by: n/a
Post mortem examination performed by: Hewett, Prescott Gardner
Medical notes: The patient was admitted with general anasarca and ascites and was in a state of great exhaustion having been brought out of her bed to which she had been confined for eleven weeks previously.
Body parts examined in the post mortem: Thorax and abdomen
Type of incident: n/a