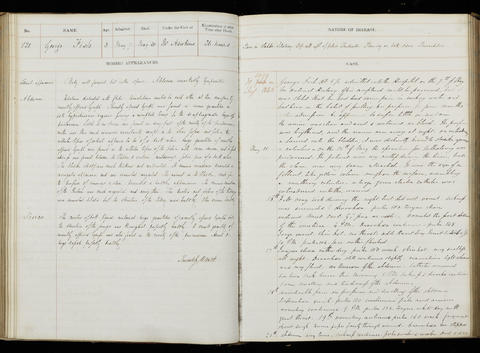 Occupation or role: [No occupation stated]
Age: 5
Gender: Male
Date of admission: 7 May 1845
Date of death: 20 May 1845
Disease (transcribed): Stone in bladder. Lithotomy. Diffuse cellular inflammation of pelvis. Peritonitis. Pleurisy on both sides. Pericarditis
Disease (standardised): Calculus (Bladder); Lithotomy; Inflammation (Pelvis); Peritonitis (Abdomen); Pleurisy (Lungs); Pericarditis (Heart)
Admitted under the care of: Hawkins, Caesar Henry
Medical examination performed by: Hewett, Prescott Gardner
Post mortem examination performed by: Lee, Henry
Medical notes: 'George Fish, at 5 ½, admitted into the hospital on the 7th of May. No distinct history of his complaint could be procured, but it was stated that he had had some pain in making water and had been in the habit of pulling his prepuce for four months’
Body parts examined in the post mortem: Abdomen, thorax