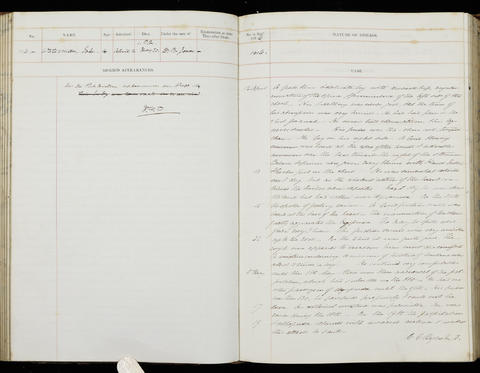 Occupation or role: [No occupation stated]
Age: 14
Gender: Male
Date of admission: 12 Apr 1856
Date of death: 20 May 1856
Disease (transcribed): Diseased Heart
Disease (standardised): Disease (Heart)
Admitted under the care of: Bence Jones, Henry
Medical examination performed by: Rogers, George Goddard
Post mortem examination performed by: Ogle, John William
Medical notes: A pale, thin and delicate boy with a diseased hip, angular curvature of the spine and prominence of the left side of the chest. His breathing was never good, and at the time of his admission was very hurried. He had had pain in the chest for a week.
Body parts examined in the post mortem: Thorax and abdomen
Type of incident: n/a