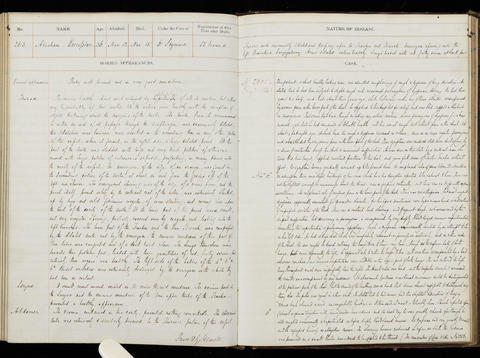 Admitted under the care of: Seymour, Edward James
Medical examination performed by: Hewett, Prescott Gardner
Post mortem examination performed by: Fuller, Henry William
Medical notes: 'This patient, a stout, healthy-looking man, was admitted complaining of cough & dyspnoea of long duration. He stated that he had been subject to slight cough with occasional paroxysms of dyspnoea, during the last three years & a half, and that about three years ago, while labouring under one of these attacks, accompanied by severe pain in the lower part of the chest, he applied to the hospital for relief and was bled, cupped & blistered in consequence’
Body parts examined in the post mortem: Thorax, larynx, abdomen