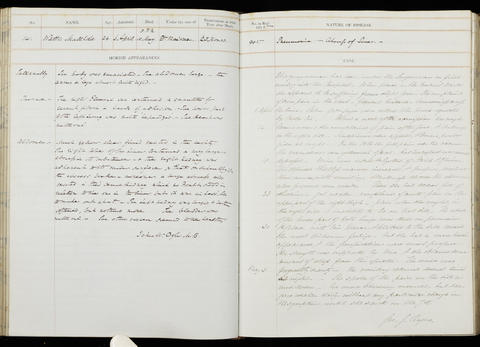 Occupation or role: [No occupation stated]
Age: 24
Gender: Female
Date of admission: 6 April 1855
Date of death: 10 May 1855
Disease (transcribed): Pneumonia. Abscess of Liver
Disease (standardised): Pneumonia (Lung); Abscess (Liver)
Admitted under the care of: Nairne, Robert
Medical examination performed by: Rogers, George Goddard
Post mortem examination performed by: Ogle, John William
Medical notes: This woman had been under the Surgeon’s care on first coming into the Hospital. When placed in the Medical Wards she appeared to be suffering from slight fever. She complained of some pain in the chest, frequent headache and uneasiness across the loins.
Body parts examined in the post mortem: Thorax and abdomen
Type of incident: n/a