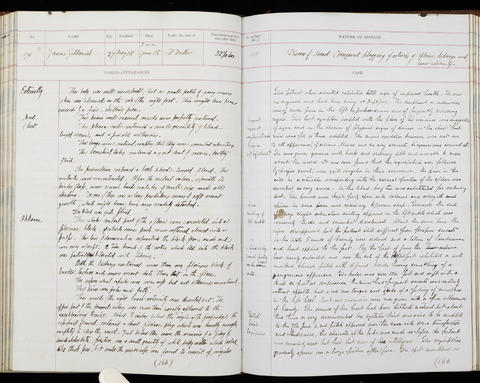 Occupation or role: Engineer
Age: 27
Gender: Male
Date of admission: 18 May 1864
Date of death: 15 Jun 1864
Disease (transcribed): Embolism
Disease (standardised): Embolism (Heart)
Admitted under the care of: Fuller, Henry William
Medical examination performed by: Dickinson, William Howship
Post mortem examination performed by: Sturges, Octavius
Medical notes: 'This patient, when admitted, exhibited little sign of impaired health. He was an engineer and had been living at Deptford. His complaint on admission was of severe pain in the left hypochondrium and of frequently recurring rigors. This last symptom, coupled with the place of his residence, was suggestive of ague, and in the absence of physical signs of disease in the chest that view was for a time adopted’
Body parts examined in the post mortem: Brain, chest, abdomen, femoral artery