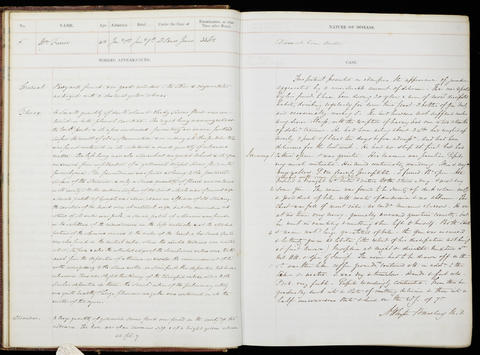 Occupation or role: [Occupation not stated]
Age: 46
Gender: Male
Date of admission: 1 Jan 1849
Date of death: 7 Jan 1849
Disease (transcribed): Diseased liver. Ascites
Disease (standardised): Disease (Liver); Ascites (Peritoneum)
Admitted under the care of: Bence Jones, Henry
Medical examination performed by: Barclay, Andrew Whyte
Post mortem examination performed by: Gray, Henry
Medical notes: 'This patient presented on admission the appearance of jaundice, aggravated by a considerable amount of delirium. He was reported by his friend to have been during 30 years a man of most dissipated habits, drinking regularly for some time past 3 bottles of gin daily and occasionally reaching 5. He had however not suffered under any severe illness, with the exception of having had one or two attacks of delirium tremens’
Body parts examined in the post mortem: Thorax, abdomen