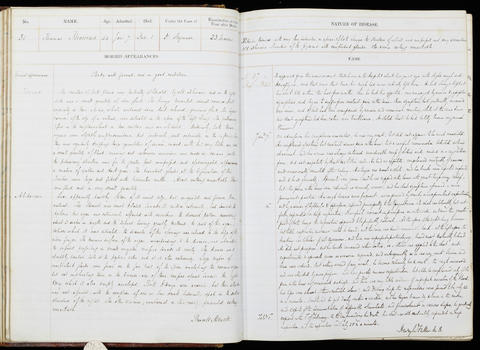 Occupation or role: [No occupation stated]
Age: 44
Gender: Male
Date of admission: 7 Jan 1846
Date of death: 1 Feb 1846
Disease (transcribed): Phthisis. Vomicae, with very few tubercles, in apices of both lungs, the structure of which was compressed and very oedematous. Old adhesions. Scirrhus of the pylorus, with encephaloid glands. Other viscera, nothing remarkable
Disease (standardised): Tuberculosis (Lung); Cancer (Stomach)
Admitted under the care of: Seymour, Edward James
Medical examination performed by: Fuller, Henry William
Post mortem examination performed by: Hewett, Prescott Gardner
Medical notes: It appeared from the man’s account, that he was in the Hospital about two years before with slight cough and haemoptysis, and that since that time his cough had never entirely left him.
Body parts examined in the post mortem: Thorax and abdomen
Type of incident: n/a