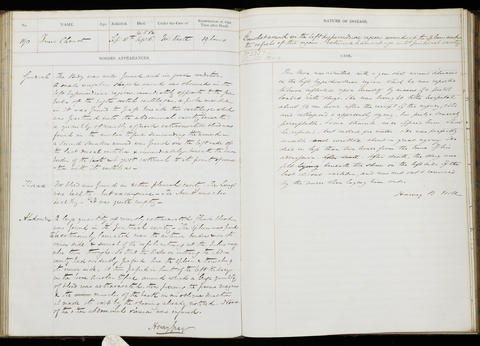 Occupation or role: [Occupation not stated]
Age: [Age not stated]
Gender: Male
Date of admission: 16 Sep 1849
Date of death: 16 Sep 1849
Disease (transcribed): Gunshot wound in the left hypocondriac region. Wound of the spleen and the vessels of this organ. Extensive haemorrhage into peritoneal cavity
Disease (standardised): Wound (Brain, spleen); Haemorrhage (Abdomen)
Admitted under the care of: Keate, Robert
Medical examination performed by: Holl, Harvey Buchanan
Post mortem examination performed by: Gray, Henry
Medical notes: 'This man was admitted with a gun shot wound situated in the left hypochondriac region which he was reported to have inflicted upon himself by means of a pistol loaded with slugs. He was brought to the hospital about ½ an hour after the receipt of the injury, cold and collapsed & apparently dying, his pulse scarcely perceptible’
Body parts examined in the post mortem: Thorax, abdomen