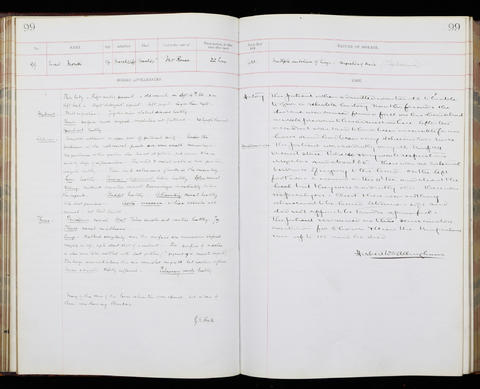 Occupation or role: [No occupation stated]
Age: 14
Gender: Male
Date of admission: 24 Mar 1891
Date of death: 25 Mar 1891
Disease (transcribed): Multiple embolism of lungs. Congestion of brain. (?Septicaemia)
Disease (standardised): Embolism (Lungs); Congestion (Brain); Sepsis (Systemic)
Admitted under the care of: Rouse, James
Medical examination performed by: Hale, Geoffrey Edward
Post mortem examination performed by: Allingham, Herbert William
Medical notes: 'The patient when admitted was too ill to be able to give a reliable history. From the friends, the disease was caused from a fall on his head about a week previous to his admission here. After the accident was said to have been insensible for an hour, and had been very delirious ever since'
Body parts examined in the post mortem: Head, neck, abdomen, thorax