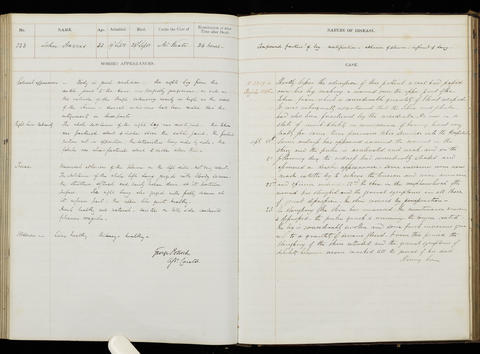 Admitted under the care of: Keate, Robert
Medical examination performed by: Pollock, George
Post mortem examination performed by: Lee, Henry
Medical notes: 'Shortly before the admission of this patient a cart had passed over his leg making a wound over the upper part of the tibia, from which a considerable quantity of blood escaped. It was subsequently ascertained that the tibia and fibula had also been fractured by the accident. He was in a state of much debility in consequence of having lived very badly for some time previous to his admission in to the hospital’
Body parts examined in the post mortem: Right lower extremity, thorax, abdomen