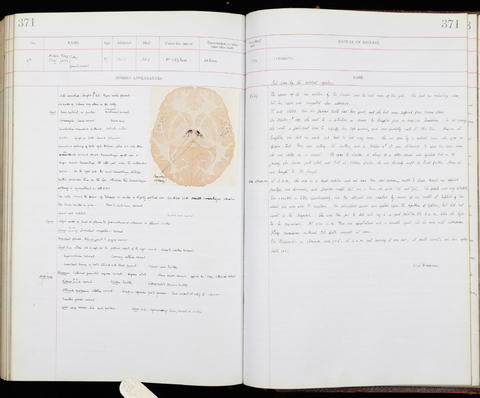 Occupation or role: General servant
Age: 19
Gender: Female
Date of admission: 10 Oct 1891
Date of death: 11 Oct 1891
Disease (transcribed): Cerebritis
Disease (standardised): Cerebritis (Brain)
Admitted under the care of: Whipham, Thomas Tillyer
Medical examination performed by: n/a
Post mortem examination performed by: Dickinson, William Lee
Medical notes: 'Not seen by the medical registrar. The upper of the two written by the curator [of the pathological museum] was the real name of this girl. She had no voluntary alias, but her name was misquoted upon admission. It was stated that her previous health had been good, and she had never suffered from serious illness. On October 7th she went to a situation in service to Brighton from her home in Faversham. In the evening she wrote a post-card home to signify her safe arrival, and was probably well at this time. However at Brighton she did no work and took to bed very soon. She was seen by a medical man who gave an opinion that there was nothing the matter; and on October 10th it was determined to send her home, since she was useless as a servant. She came to London in charge of a fellow-servant who reported that on the journey she became quite silent, and that at Victoria station she was obviously unfit to travel farther. Hence she was brought to St George's
Body parts examined in the post mortem: Head, thorax, abdomen
Illustrations: Yes
Type of incident: n/a n/a