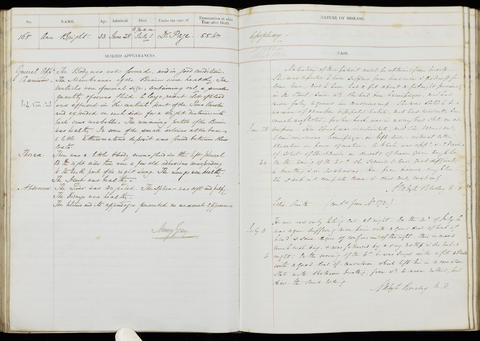 Occupation or role: [No occupation stated]
Gender: Female
Age: 33
Date of admission: 28 Jun 1854
Date of death: 1 Jul 1854
Disease (transcribed): Apoplexy
Disease (standardised): Stroke (Brain)
Admitting doctor: Page, William Emanuel
Surgeon: Gray, Henry
Physician: Barclay, Andrew Whyte
Medical notes: 'No history of this patient could be obtained from herself. She was reported to have suffered from headache & giddiness for some time, and to have had a fit about a fortnight previously in the street […] She was stated to be a woman of drunken, dissipated habits, and had evidently been much neglected, for her back was in a very bad state on admission’
Body parts examined in the post mortem: Cranium., thorax, abdomen