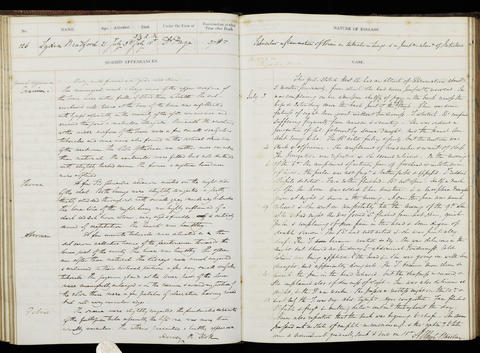 Occupation or role: [No occupation stated]
Age: 21
Gender: Female
Date of admission: 3 Jul 1850
Date of death: 15 Jul 1850
Disease (transcribed): Tubercular inflammation of brain and tubercles in lungs and in peritoneum. Ulceration of intestine
Disease (standardised): Tuberculosis (Brain); Tuberculosis (Lung); Tuberculosis (Abdomen); Ulcer (Intestines)
Admitted under the care of: Page, William Emanuel
Medical examination performed by: Barclay, Andrew Whyte
Post mortem examination performed by: Holl, Harvey Buchanan
Medical notes: This patient stated that she had an attack of Rheumatism about the months previously, from which she had never perfectly recovered. She was complaining on her admission chiefly of pain in the back across the hips and extending down the back part of the left thigh.
Body parts examined in the post mortem: Cranium, thorax, abdomen and pelvis
Type of incident: n/a