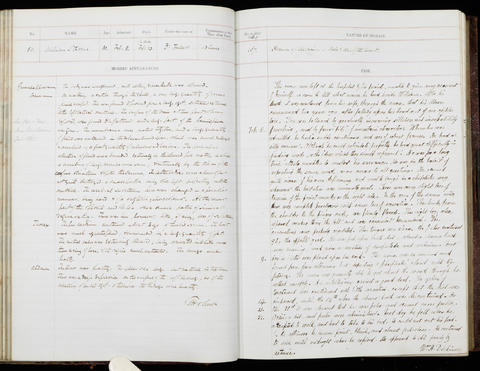 Occupation or role: [Occupation not stated]
Age: 30
Gender: Male
Date of admission: 8 Feb 1860
Date of death: 23 Feb 1860
Disease (transcribed): Disease of the brain. Valvular disease of the heart
Disease (standardised): Disease (Brain, heart)
Admitted under the care of: Fuller, Henry William
Medical examination performed by: Dickinson, William Howship
Post mortem examination performed by: Holmes, Timothy
Medical notes: 'This man was left at the hospital by his friends, unable to give any account of himself or even to tell what name he had beside William. After his death it was ascertained from his wife […] that his illness commenced two years ago after falling upon his head out of an apple tree’
Body parts examined in the post mortem: Cranium, thorax, abdomen