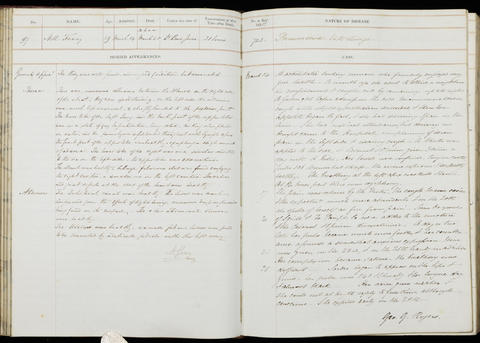 Occupation or role: [No occupation stated]
Age: 59
Gender: Female
Date of admission: 14 Mar 1855
Date of death: 28 Mar 1855
Disease (transcribed): Pneumonia. Both Lungs
Disease (standardised): Pneumonia (Lung)
Admitted under the care of: Bence Jones, Henry
Medical examination performed by: Rogers, George Goddard
Post mortem examination performed by: Gray, Henry
Medical notes: A month before admission she went to attend a neighbour in confinement and caught cold by remaining up all night. A fortnight before admission the cold became even more severe, a cough with slight expectoration came on, and then her appetite began to fail. She had shivering and pain in the loins.
Body parts examined in the post mortem: Thorax and abdomen
Type of incident: n/a