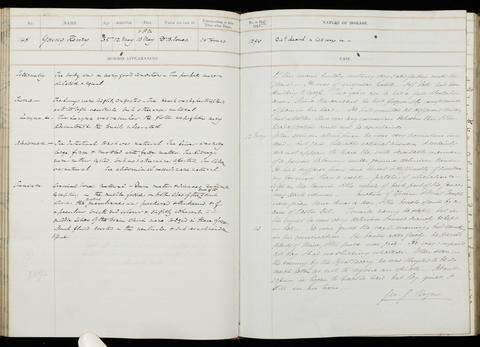 Occupation or role: [No occupation stated]
Age: 35
Gender: Male
Date of admission: 12 May 1855
Date of death: 13 May 1855
Disease (transcribed): Diseased Heart and Kidneys
Disease (standardised): Disease (Heart); Disease (Kidney)
Admitted under the care of: Bence Jones, Henry
Medical examination performed by: Rogers, George Goddard
Post mortem examination performed by: Ogle, John William
Medical notes: Of this man's history nothing very satisfactory could be gleaned. Two years ago he had a fall and broke his arm. Since the accident he had frequently complained of pain in the head. He had vomited at different times, but whether there was any connection between this and the head affections could not be ascertained.
Body parts examined in the post mortem: Thorax, larynx, abdomen and cranium
Type of incident: Trauma/accident?