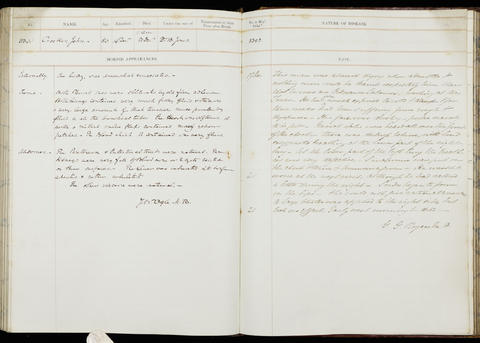 Occupation or role: Ordnance Labourer
Age: 50
Gender: Male
Date of admission: 19 Dec 1855
Date of death: 21 Dec 1855
Disease (transcribed): Bronchitis
Disease (standardised): Bronchitis (Lung)
Admitted under the care of: Bence Jones, Henry
Medical examination performed by: Rogers, George Goddard
Post mortem examination performed by: Ogle, John William
Medical notes: This man was almost dying when admitted and nothing more could be learnt apart from that he was an Ordnance Labourer at the Tower. He had been much exposed to cold and damp for three weeks had been suffering from cough and dyspnoea.
Body parts examined in the post mortem: Thorax and abdomen
Type of incident: n/a