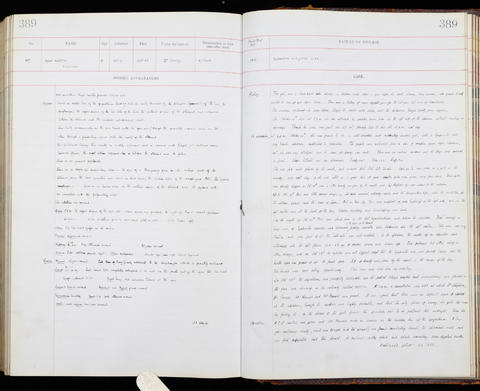 Occupation or role: Kitchenmaid
Age: 21
Gender: Female
Date of admission: 16 Oct 1891
Date of death: 25 Oct 1891
Disease (transcribed): Perforation of a gastric ulcer
Disease (standardised): Ulcer (Stomach)
Admitted under the care of: Cavafy, John
Medical examination performed by: Rolleston, Humphry Davy
Post mortem examination performed by: Dickinson, William Lee
Medical notes: 'This girl was a housemaid who became a kitchenmaid about a year before her death because, being anaemic, she found herself unable to run up and down stairs. There was a history of some dyspeptic pains for the last year, but none of haematemesis. The anaemia continued in some degree, though the bowels acted daily, and the catamenia [menstruation], though scanty, were regular'
Body parts examined in the post mortem: Abdomen, thorax