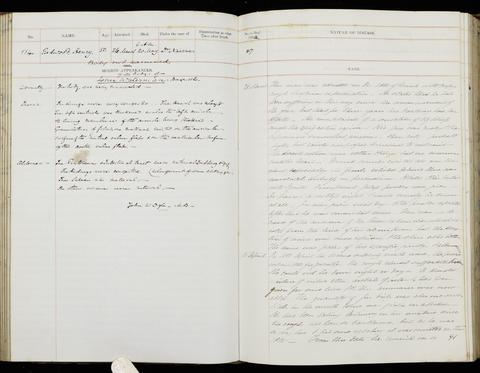 Occupation or role: [No occupation stated]
Age: 50
Gender: Male
Date of admission: 26 Mar 1856
Date of death: 20 May 1856
Disease (transcribed): Diseased Heart
Disease (standardised): Disease (Heart)
Admitted under the care of: Nairne, Robert
Medical examination performed by: Rogers, George Goddard
Post mortem examination performed by: n/a
Medical notes: This man was admitted with dropsy, cough and copious expectoration. He stated that he had been suffering in this way since the commencement of the year, but that for three years his breathing had been affected. He complained of a sensation of tightness across the epigastric region.
Body parts examined in the post mortem: The body was not examined
Type of incident: n/a