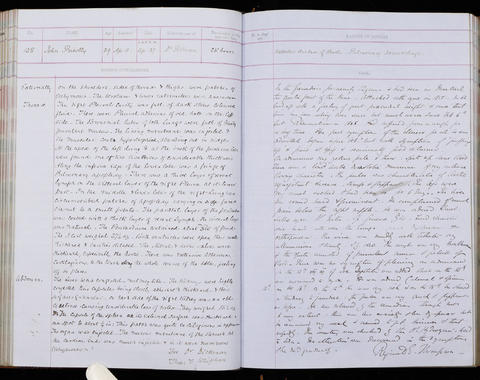 Occupation or role: Discharged soldier
Age: 29
Gender: Male
Date of admission: 11 Apr 1866
Date of death: 27 Apr 1866
Disease (transcribed): Valvular disease of heart. Pulmonary haemorrhage
Disease (standardised): Disease (Heart); Haemorrhage (Lung)
Admitted under the care of: Pitman, Henry
Medical examination performed by: Thompson, Reginald Edward
Post mortem examination performed by: Whipham, Thomas Tillyer. Dickinson, William Howship
Medical notes: He was in the Grenadiers for nearly twelve years and had been in Montreal for the greater part of the time. He was attacked with ague in 1855 and laid up with a feeling of great praecordial weight and had been ailing ever since.
Body parts examined in the post mortem: Thorax and abdomen
Type of incident: n/a