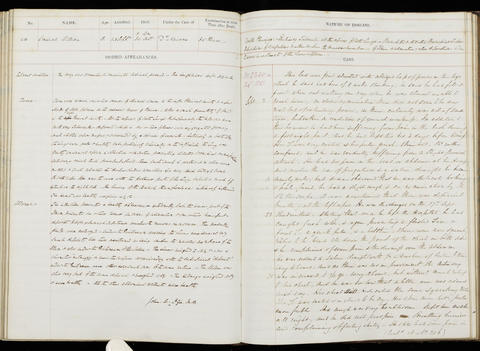 Occupation or role: [No occupation stated]
Age: 18
Gender: Male
Date of admission: 23 Sep 1851
Date of death: 30 Oct 1851
Disease (transcribed): Double pleurisy. Miliary tubercle at the apices of both lungs. Bronchitis & dilated bronchial tubes. Depositions of scrofulous matter under the mucous membrane of ileum & ulceration. Also depositions under the serous investments of the liver & spleen
Disease (standardised): Pleurisy (Lungs); Tuberculosis (Lungs); Bronchitis (Lungs); Deposit (Intestines, liver, spleen)
Admitted under the care of: Nairne, Robert
Medical examination performed by: Barclay, Andrew Whyte
Post mortem examination performed by: Ogle, John William
Medical notes: 'This lad was first admitted with alleged loss of power in the legs which he said had been of 8 weeks’ standing. He said he had felt it first when out walking one day when he was almost unable to reach home. On closer examination there did not seem to be any real loss of voluntary power, as there certainly was not of sensation, but rather a condition of general weakness’
Body parts examined in the post mortem: Thorax, abdomen