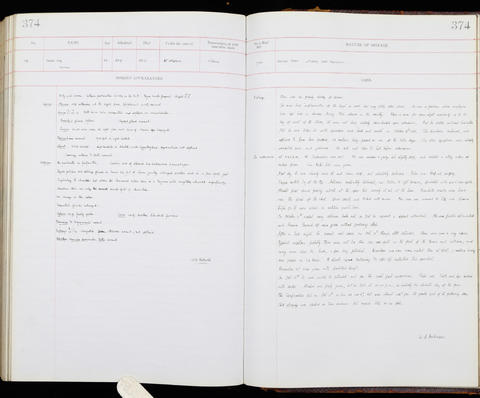 Occupation or role: Footman
Age: 23
Gender: Male
Date of admission: 9 Oct 1891
Date of death: 13 Oct 1891
Disease (transcribed): Enteric fever. Dilated left ventricle
Disease (standardised): Typhoid fever (Systemic); Disease (Heart)
Admitted under the care of: Whipham, Thomas Tillyer
Medical examination performed by: Rolleston, Humphry Davy
Post mortem examination performed by: Dickinson, William Lee
Medical notes: 'There was no family history of disease. The man had ‘inflammation of the lungs' in 1888 but very little other illness. He was a footman whose employers had left him in London during their absence in the country. There is room for some slight uncertainty as to the day of onset of the illness, the man not being entirely clear-headed upon admission. But he stated without hesitation that he was taken ill with diarrhoea and ‘heats and sweats' on October 3rd inst'
Body parts examined in the post mortem: Thorax, abdomen