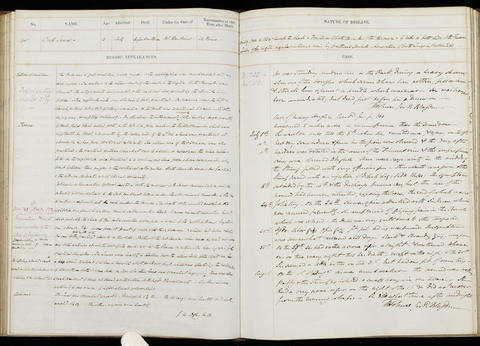 Occupation or role: [No occupation stated]
Age: 13
Gender: Male
Date of admission: 1 Jul 1851
Date of death: 1 Jul 1851
Disease (transcribed): Injury from a blow across the chest. Fracture of both clavicles of the sternum & of ribs on both sides of the thorax. Lesion of the right jugular internal vein by fractured clavicle. Laceration of both lungs by broken ribs
Disease (standardised): Injury (Chest); Fracture (Sternum, ribs, clavicle); Lesion (Clavicle); Laceration (Lungs)
Admitted under the care of: Hawkins, Caesar Henry
Medical examination performed by: Holmes, Timothy and Blagden, Robert
Post mortem examination performed by: Ogle, John William
Medical notes: 'He was standing under a tree in the Park during a heavy shower when one of the boughs which seems to have been rotten, fell on him & struck him against a hurdle which was near. He was brought here immediately, but died just before his admission’
Body parts examined in the post mortem: Thorax, abdomen

Preparation of fractured clavicles I.79 (24B). Series VI, Preparation 172 (94A). Preparation 7.a.15 shows laceration of the internal jugular vein

See description in Beales Archives, Vol [not entered], p. [not entered], with an illustration [Lionel Smith Beale, editor of ‘Archives of Medicine’ journal]