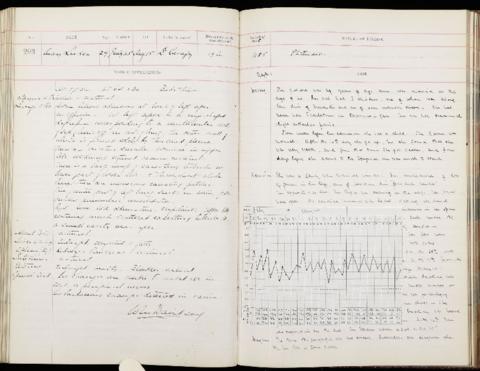 Occupation or role: [Wife of] Painter
Age: 29
Gender: Female
Date of admission: 25 Jul 1888
Date of death: 15 Aug 1888
Disease (transcribed): Phthisis
Disease (standardised): Tuberculosis (Lungs)
Admitted under the care of: Cavafy, John
Medical examination performed by: Davidson, William Marshall
Post mortem examination performed by: Sisley, Richard
Medical notes: 'The patient was 29 years of age and was married at the age of 20. She had had 3 children, one of whom was living. One died of bronchitis and one of some unknown disease. She had never had scarlatina nor rheumatic fever, but she had occasional slight articular pains. Three weeks before her admission she had a child. The labour was normal
Body parts examined in the post mortem: Body parts examined: Larynx, lungs, heart, liver, spleen, intestines, uterus, spinal cord